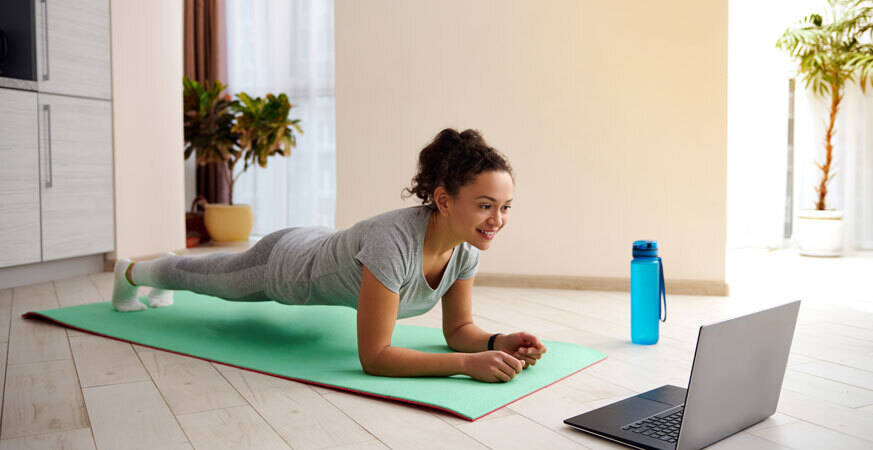 If you’ve ever tried to get in shape and lose some body fat, and have found your progress to be slow in comparison to your male partner or friends, you’re not alone. It turns out that there are a host of reasons why losing weight is a different kettle of fish for women than for men, with metabolism, hormone levels, and eating habits all contributing to the challenge of sustainable weight loss.

In this article, we identify the barriers to weight loss affecting women to a greater extent and suggest methods of overcoming these obstacles.

Why is it more difficult to lose weight as a woman?

Simply put, the construction of the female body enables women to perform a task that the male body cannot; giving birth. Whilst true that men and women are both necessary to create new life (traditionally at least), reproduction is obviously far more nutritionally taxing for women than men. Evolutionarily, women carry higher amounts of body fat so that they are best suited to developing a baby. For example, body fat is required to produce enough leptin for optimal fertility, and the omega-3 fatty acid DHA, that’s typically stored in the lower body, is key to healthy brain development of a baby. This means that for women, a healthy body fat percentage ranges between 14% and 31% depending on age and athleticism, whereas for men this range is 6% to 24%. On top of this, women’s body fat is typically stored as subcutaneous fat (functional fat stored under the skin that’s most visible) whilst men store a higher percentage of visceral fat (potentially harmful fat that’s stored between the organs).

In this regard, having a greater percentage of body fat as a woman is perfectly natural, and for the most part healthy. But if you do want to lose some excess body fat, there are some other considerations to bear in mind. Because of the aforementioned physiological gender differences in fat storage, men tend to have a greater fat-free mass compared to women of the same BMI, typically having between 3% to 10% more of this lean muscle mass compared to women. Lean muscle burns more calories than fat, even whilst resting, resulting in faster metabolisms in men on average. Additionally, the higher testosterone levels in men enable them to build muscle quicker and gain more of it, further contributing to speedy metabolisms.

This is compounded by women’s gym habits. Generally, women tend to focus more on cardiovascular fitness and toning, lifting lighter weights for more repetitions. Men on the other hand are more likely to opt for routines that involve greater resistance, lifting heavier weights. For men, this results in gaining more muscle mass, increasing the metabolic rate. Men are more likely to have a fitness goal of building muscle size, whilst women tend to work on toning, in part due to not wanting to obtain a bulkier, muscular physique. However, as lifting heavier weights is key to boosting muscle composition which we know improves the metabolism, by opting against including these exercises in your workouts, your metabolic rate is unlikely to see big increases. Fitness regimes are often tailored to either muscle gain or weight loss, although ironically one of the best ways to lose fat mass is by increasing your lean muscle percentage, so by avoiding muscle-building exercises out of fear of bulking up, you might be limiting your chances of quickly and effectively losing burning calories.

Men and women also differ biochemically, and these differences add to the complexity of losing weight as a woman. Hormones that are key to regulating appetite have been found to differ dramatically between genders. Levels of ghrelin (also known as the hunger hormone) increase in women after a workout, whilst levels of leptin (the hunger-inhibiting hormone) decrease, but this fluctuation does not occur post-workout in men. This may lead women to eat more after a workout than men, putting them at greater risk of weight gain.

Another area of appetite-affecting hormone fluctuation that is unique to women occurs between ovulation and getting your period. During these couple of weeks, estrogen levels dip and progesterone spikes, contributing to stronger food cravings, with women eating an average of 238 more calories per day during this period. Additionally, water retention differs at certain points in the menstrual cycle, such as being notably higher between mid-cycle to immediately before your period. This is something to consider for those measuring their weight regularly, as to not be disheartened by fluctuating weight at different times of the month.

The common condition Polycystic Ovary Syndrome (PCOS) affects 1 in 10 women of child-bearing age and is caused by an imbalance of the reproductive hormones, which can result in weight gain amongst other symptoms. Women who experience weight gain due in part to this condition tend to see body fat go build on the upper body and abdomen.

Numerous studies have shown how gender differences in the relationship we have with food may contribute to increased difficulty in weight loss for women. Firstly, it’s been observed that women’s and men’s brains are wired differently in terms of feeling sated. One study found that women’s brain activity in the regions controlling the drive to eat were active when presented with smells and sights of treats such as pizza, chocolate cake and cinnamon buns, despite the women stating they weren’t hungry initially. Men did not show the same level of brain activation in this region.

In general, it is thought that women might experience more profound food cravings than men. A 2013 study concluded that women tend to be more emotionally influenced to eat compared to men. In an effort to increase mood using food, they lean towards the fatty, salty, sugary foods that ignite the brain’s reward centre, which can lead to quicker weight gain.

Whilst both men and women tend to have an all or nothing approach to dieting, dietitians have observed women to take more extreme measures, such as juice cleanses, more extreme dieting, and skipping meals altogether. These methods of yo-yo dieting are not as sustainable as getting back on track by modifying your diet gradually, and introducing a little more exercise into your routine, something men appear to do more of, says dietitian and professor of medicine Pamela Peeke . Another theory, only anecdotally observed, is that when women first move in with a male partner they might experience weight gain due to eating the same quantity of food and frequency of meals as their partner, who is on average more likely to require a greater number of calories to maintain their body weight. Eating the same sized portions as a man is difficult to avoid in many cases, for example with restaurants producing the same sized portions regardless of who they’re serving to, passing the onus to the individual to regulate calorie intake consciously.

The best ways for women to lose weight

If you’re someone who gravitates towards doing cardiovascular exercises when you work out, such as using treadmills and elliptical trainers at the gym, consider adding strength training to your routine. As muscle is so good at burning calories, try working some higher resistance and heavier weighted exercises into your workouts to up your calories expenditure.

Ensure you’re getting enough protein in your diet to enable the growth of those calorie-burning muscles, besides other necessary vitamins and nutrients. If you’re actively working out, aim to eat between 1.2 to 1.7 grams of protein per kilo of your body weight each day. This works out at roughly 20 to 30 grams of protein per meal, and great protein-rich foods include chicken, fish, eggs, legumes and nuts. Spend some time working out which balanced weight loss diet plan is right for you, with a key factor being one that you’re able to stick to and that results in minimal unhealthy food cravings.

Think about your relationship with food, and be honest with yourself about the areas causing issues. If you find unhealthy snacking to be a pitfall, for example, there’s strategies you can use to stay on track. The simplest way to prevent spontaneous snacking when you get a food craving is by not bringing unhealthy snacks into the house to begin with, which takes the need for in-the-moment discipline out of the equation due to the unavailability of the treat. With that said, if you live with other people this may not be possible, or you may get your unhealthy snack fix when out and about as opposed to at home. Another method to try is replacing unhealthy snacks with healthier options (that are still tasty!) such as snack bars that are high in protein and fiber, and lower in sugars and fats. Your urge to snack might also indicate something lacking in your main meals, so try to eat substantial portions of healthy, filling food during the 3 main meals of the day, and you should find that your energy lasts longer and your urge to snack in between meals diminishes.

When used alongside lifestyle changes such as a healthier diet and regular exercise schedule, clinically-proven weight loss treatment can result in the desired weight loss. Medications such as Orlistat, Alli, Xenical and Orlos are known as dietary fat binders and work by blocking the lipase enzyme in the stomach from digesting some fat molecules, causing approximately one third of the fat in a meal to pass through your digestive system unabsorbed. The active ingredient, Orlistat, is the only medicine licensed in the EU for weight loss. Alternative treatments include the slimming aid XLS Medical Max Strength which works by transforming sugar, fat and carbohydrates molecules into a fat-fibre complex that the body can’t break down, so passes through the digestive system unabsorbed.

Early research indicates that CBD has a positive effect on facilitating weight loss, including reducing the appetite, and converting white fat into healthier brown fat. CBD extract can be found in a number of CBD products, including oral drops, body balms and skin creams. Keep in mind that CBD should be taken only as a supplement for weight loss as opposed to a medical treatment.

Besides diet and exercise, high quality sleep is considered the most important element of successful weight loss strategies, and yet is often overlooked. Poor sleep can increase our appetite, increase the likelihood of poor food choices, lower our metabolism, and decrease our motivation to engage in physical activity. Check out our tips for improving your quality of sleep.