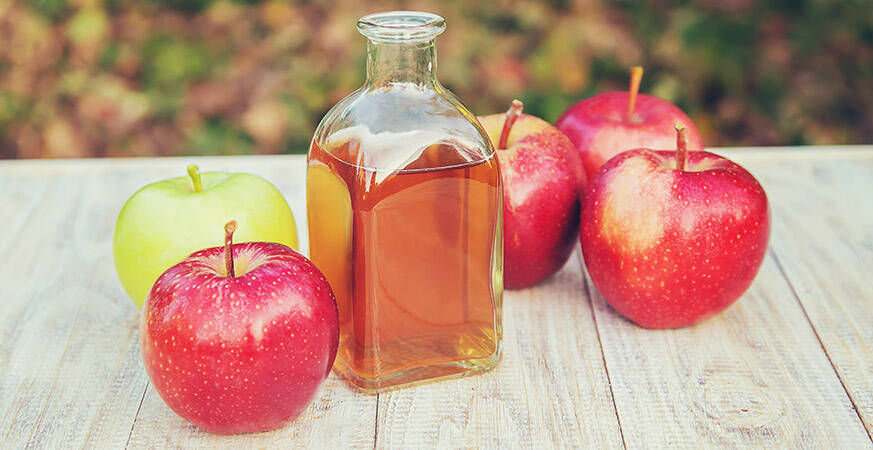 When it comes to weight loss, there is never a quick fix solution to achieving your goals in a healthy, sustainable way. Popular weight loss trends and fads come and go; so it is important to make informed choices about your weight loss based on reliable evidence.

Not taking facts into account can do you more harm than good in your weight loss journey. One recent weight loss supplement that has received a high level of interest is apple cider vinegar, but why exactly has this trend received recent attention?

In this article, we explain what apple cider vinegar is, explore the science behind the claims and outline how it compares to other clinically proven weight loss treatments.

What is apple cider vinegar and how is it made?

Apple cider vinegar is a vinegar made from fermented apple juice in a two-step fermentation process. First, apples are crushed before yeast is added to ferment the apples’ sugar into alcohol. Finally, the alcohol is treated with bacteria which converts the alcohol into acetic acid.

Acetic acid makes up between 5% and 6% of apple cider vinegar. Acetic acid has been used in medicine since the 1800s as a treatment for cancerous tumours, and has been shown to help reduce the size of cancer in rats.

While these animal studies look promising, research confirming and explaining how apple cider vinegar helps weight loss in humans has been very limited. In one Japanese study released over ten years ago, participants who took 1-2 tablespoons of apple cider vinegar per day showed a reduction in body weight, BMI and waist circumference.

What are the side effects of apple cider vinegar?

How does weight loss medication compare to apple cider vinegar?

Below, we compare the function, efficacy and side effects of weight loss medication Orlistat to apple cider vinegar.

Orlistat is not an appetite suppressant; instead Orlistat reduces the amount of fat absorbed from food by your body. Orlistat does this by inhibiting the enzyme lipase from breaking down fat in your stomach.

Orlistat is to be taken up to three times a day, before, after or during a meal that contains fat. The recommended fat content for a meal supported by Orlistat is no more than 30% of that meal’s calories. You can skip a tablet of Orlistat if a meal contains little or no fat. All of these factors could drive a greater incentive for people using Orlistat to reduce their fat consumption and calorie intake.

Unlike apple cider vinegar, there is a vast range of scientific studies proving that Orlistat significantly increases weight loss in humans, not just animals.

In a large review of eleven studies, Orlistat increased weight loss by 2.7 kg compared to the placebo pill. In a more recent study that tested the efficacy and safety of Orlistat, participants who took the pill observed significant weight loss of 4.65kg compared to 2.5kg in the placebo group.

Additionally, Orlistat has also been found to significantly decrease blood pressure and heart rate, according to a study with 628 patients across 56 weeks.

Side effects of Orlistat

Due to the lack of human studies and clinical trials available, we cannot conclude that apple cider vinegar really does significantly aid weight loss. Other weight loss supplements such as weight loss pills, however, have much more evidence to prove that they significantly reduce the weight of those who take it.