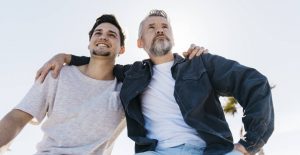 One of the most common myths associated with erectile dysfunction (ED) is that it only affects older men. This isn’t an unreasonable assumption. Most of us understand that our health and vitality deteriorates as we get older: our energy levels decline, it becomes easier to put on weight, we become less mobile and our skin and hair begin to show the classic signs of aging. Intuitively, it makes sense that our sexual health would be affected by aging as well.

This myth is so stubborn because it is, like a lot of myths, half-true. In 2013, a Swedish study found that the prevalence of ED did, in fact, tend to increase with age. The study asked a random sample of more than 10,000 men to fill in a questionnaire on two separate occasions, in 1992 and 2003. The respondents were separated by age, and in both surveys the rate of ED increased with age at the same time sexual activity decreased.

Researchers accounted for lifestyle factors by taking into account the prevalence of smoking and frequency of physical exercise among respondents. As they became older, respondents smoked less and exercised more – but the prevalence of ED increased all the same. It would appear, then, that the paper substantiates the claim ED is a condition that affects older men.

But it’s important to remember that even if ED is more common in older men, it is a condition that affects men of all ages. And in fact, a more recent study published in 2019 found that age as a risk factor for ED is non-linear – meaning that while the risk of developing ED increases dramatically for men over the age of 65, for men over the age of 45 the risk is far lower. For that reason, the study concluded that age could bias further studies on ED.

To be clear, this is a bias that matters. Like the myth that ED only affects older men, attributing the condition to age in a medical setting risks ignoring other possible causes and contributing factors. And these factors can be serious: high blood pressure, diabetes and peripheral neuropathy (reduced nerve function) are all conditions that if left untreated can be debilitating and dangerous. With that in mind, here are the most probable contributing factors to ED, sorted by age group.

If you’re in this age group, the likelihood of developing ED is relatively low. However, a 2017 study found that while the academic literature on ED in young men was scarce in comparison to that in older men, the problem was becoming “increasingly frequent”. And in fact, prior studies found that ED was far more prevalent in young men than otherwise assumed. An Italian study published in 2013, for example, found that out of 439 men who had ED, 26% of them were under the age of 40. Other reports claim that up to a third of all young men suffer with ED.

So we know far more young men suffer with ED than previously thought. But what could be causing it? The first – and perhaps most obvious – thing to recognise is that if you’re young, your body’s probably in better condition than someone who’s a lot older. Contributing factors such as hypertension and type two diabetes tend not to emerge until later on in life, so the likelihood of an underlying physical cause is relatively low.

Instead, it might be more useful to look to lifestyle factors and your mental health when trying to identify the problem. Young people tend to party more, but excessive alcohol consumption and (especially) smoking are classic contributing factors to male sexual dysfunction. In addition, what some commentators have described as a crisis of young people’s mental health: a YouGov survey from 2019 found 18% of young people believe life isn’t worth living, while one in five Britons feel high levels of anxiety at any one time. Low mood and anxiety can greatly affect libido – and although psychological causes of ED are nowhere near as common as physical ones, it is a possibility that in young people should be properly investigated.

As you progress further into your thirties, the risk factors associated with ED in younger men might not be as prominent, but new ones emerge. While generalised anxiety and depression might not be something to worry about as much, men in this age group often experience greater levels of stress related to their careers. In addition, your late thirties and forties are around the time when the risk of developing a physiological cause of ED increases.

Among the risk factors for ED in this age group are lifestyle factors that make cardiovascular disease more likely: obesity, excessive alcohol consumption and smoking all significantly increase your risk of developing ED. In addition, diseases that damage the nerves are more likely to emerge during these years, which can cause ED as well. These include peripheral neuropathy, which causes nerves in the extremities to become damaged.

It’s crucial to take care of your health during these years because not doing so makes the likelihood of developing serious illnesses later on in life. This is not unlike the case with ED: living a healthier lifestyle makes it less likely to develop severe ED in your fifties and sixties.

These are the years where developing a physiological cause of ED becomes increasingly likely. Cardiovascular disease is one of the main causes of ED, and is most common after the age of 50. As mentioned earlier, this means taking care of your health in the preceding years is absolutely essential. In addition, many of the risk factors associated with cardiovascular disease can also contribute to ED and tend to become worse as you get older: high blood pressure, high cholesterol, obesity and type two diabetes are all problems that disproportionately affect older men.

In addition to ED, symptoms of male menopause often include:

In rare cases, some men will experience a dramatic reduction in the level of testosterone in their body as they get older. This is known as late-onset hypogonadism. It isn’t a normal part of aging, but a specific medical condition that may require hormone replacement therapy (HRT) to treat. In these instances, your GP may refer you to an endocrinologist to measure your testosterone levels and determine whether treatment would be appropriate.

Whatever your age, the reality is that looking after your body makes you less likely to develop ED later in life. But if you are struggling with the condition, it’s crucial that you see your GP to rule out anything serious that could be causing it. Once serious causes are ruled out, you can focus on treatment – and the good news is that, since the 1990s, ED has become far easier to treat. If you want to know more about ED and how to treat it.